The Need to Teach the History Behind Current Events Has Rarely Been Clearer. Here’s How Some Teachers Are Getting Ready

Some Teachers Are Getting Ready 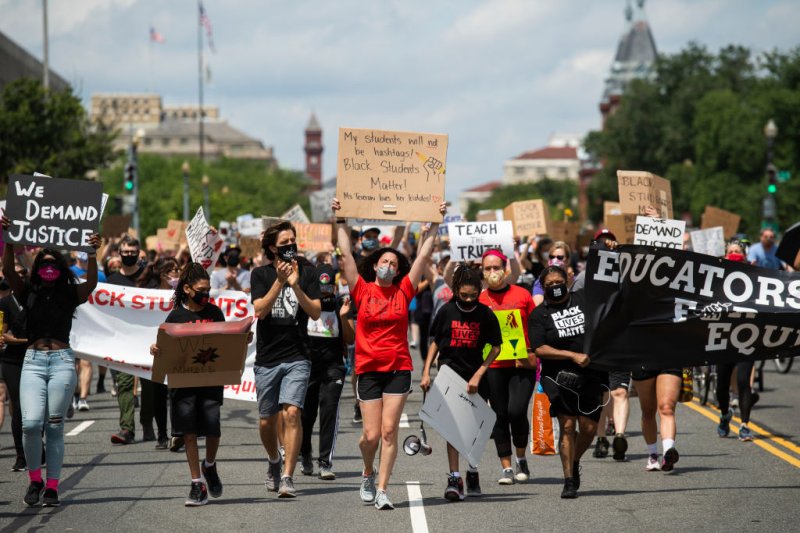 Demonstrators march towards the U.S. Department of Education as part of the Black Students Matter rally, which was organized by Educators for Equity on June 19, 2020, in Washington, D.C. Matt McClain/The Washington Post—Getty ImagesBY OLIVIA B. WAXMAN  JULY 14, 2020 10:00 AM EDT

Not even a week into summer vacation, Ron DeGregorio’s students were asking to be back in the virtual classroom.

As protests unfolded following the May 25 death of George Floyd, DeGregorio, 31, who teaches Government at a high school in the Toledo, Ohio, area, began to get messages from students who wanted to talk about the relationship between current events and what they’d learned in school. But no such extra session has yet taken place, in part because of the teacher’s hesitation when it comes to broaching the subject in a classroom setting. “I’m not exactly sure what the best route is on a sensitive subject currently unfolding,” DeGregorio says. “It’s a double-edged sword; if you don’t bring it up, then you’re almost as guilty in a different way. I’m thankful there’s a buffer of the summer to figure that out.”

His hesitancy isn’t new. In a 2017 survey by the Southern Poverty Law Center, 90% of American teachers claimed they were comfortable talking about slavery in the classroom, but open-ended follow-up questions revealed a “profound unease around the topic.” But this summer, he’ll have some extra help figuring out how to be have those tough discussions when school resumes: the National Constitution Center (NCC) is taking its annual Summer Teaching Institutes online this July.

As teachers face a new sense of urgency when it comes to teaching topics related to current events, the Philadelphia-based NCC hopes to arm middle- and high-school teachers like DeGregorio with the knowledge needed to ground their discussions in a deeper understanding of the history of topics ranging from slavery and Reconstruction to federalism and women’s suffrage. And in doing so, the effort also offers a window into difficult conversations happening worldwide.

One factor is on their side: teachers say students are suddenly more interested than ever. During its spring programs for students, held against the backdrop of the battle over reopening states, the NCC noticed more student interest than usual in learning about how local and state government powers differ from federal government powers. “Five years ago, it would have been like pulling teeth to talk about federalism,’” says Kerry Sautner, Chief Learning Officer at the National Constitution Center. “We’re always teaching the core pieces of the Constitution but the interest and current conversations around it are so much more heightened.”

“It started to click,” echoes Lauren LeBato, 26, an AP U.S. Government and Politics teacher in Lake Charles, La., of her students realizing, amid stay-at-home orders, how national and state policies can compete with one another.

Sure enough, a workshop held July 7 during the first week of the summer programs focused on the theme of teaching federalism; like all the planned sessions, it included a mix of current-events-inflected lesson planning tips and lectures from a scholar on the topic. During the session, teachers discussed the importance of showing students the difference between constitutional questions (Does the president have the power to enact a national mask requirement?) versus political questions (Should a president enact a national mask requirement?). When teachers were asked to list constitutional questions they had, the queries were all related to the current pandemic.

Another thing that’s changed in recent months is who is demanding more context for the current movement, says Hasan Kwame Jeffries, host of the podcast Teaching Hard History and a professor of history at The Ohio State University who’s lecturing for an NCC session on “Slavery and the American Identity” on July 27th. Before the pandemic and recent protests, when he got questions about sensitively teaching the histories of underrepresented groups in American society, those questions came mostly from teachers and school diversity offices. Now, they’re also coming from both senior school officials — especially in the wake of Black students sharing open letters detailing the emotional abuse they’ve suffered at predominantly white schools — and from students themselves.

“You’ve had educators and parents saying ‘teach this’, but not a sense of urgency coming from the kids because the kids don’t know what they don’t know. Now students, and not just Black students, are applying the pressure. We haven’t seen that before,” he says. “And you know who’s the most prepared to have these conversations? The students! We project onto them our discomfort with these issues, so by the time they get to high school, they pick up on our ‘Hey, let’s not talk about that’ cues and signals. Part of what teachers have to do is help our students develop empathy in addition to pointing out what critical knowledge they need.”

“Who will vote in November of 2020 — by what means, by what terms — was going to be an interesting question and now becomes the question,” says Martha S. Jones, author of Vanguard: How Black Women Broke Barriers, Won the Vote, and Insisted on Equality for All, who will be leading an NCC lecture on “Black Women & the Women’s Suffrage Movement” on July 29.

In her upcoming lecture, Jones, who is also a professor of history at Johns Hopkins University, hopes to debunk the idea that the 19th Amendment gave all women the right to vote, as most states continued to disenfranchise Black people with tactics like literacy tests, grandfather clauses and the threat of violence. She’ll also speak about how Black women persisted in fighting for their rights — an idea that has current-events links that go beyond this summer’s 100th anniversary of the 1920 ratification of the amendment. As Jones points out, voting rights advocate Stacey Abrams has invoked Shirley Chisholm and Sojourner Truth, giving teachers an opportunity to talk about the history of the tradition that Abrams is working within.

At the root of that struggle for voting rights is white supremacy, the enduring impact of which is also the main point Jeffries wants to get across in his lecture. White supremacy can be one of the most difficult topics for teachers to bring up in a middle- or high-school classroom, but, he says, no American history curriculum can be complete without acknowledging it. “The belief in white supremacy and African American inferiority doesn’t dissipate when Robert E. Lee surrenders at Appomattox,” he says. “That legacy still informs policy decisions and personal behavior today.”

That impact is why it’s so important for teachers to feel comfortable not just broaching the subject, but discussing it in depth — a fact that’s clear to the educators who have signed up for the NCC sessions. As Nick Hegge, 33, a high school Government teacher outside of Omaha, puts it, learning is a lifelong process for both the teacher and the student. He notes that the lynching of Will Brown during the Omaha race riot of 1919 has become more widely discussed in recent years, and he’s very aware of the fact that he didn’t learn about it when he was in high school. That dynamic can be a source of anxiety for teachers, but also an opportunity.

“I’ve been seeing a lot on social media and in the news about people saying well, ‘I can’t believe I didn’t learn about this in History class or Government class.’ It’s a lot of pressure. Students usually have one American History class in middle school and high school and it’s hard to get to everything. We teach some core facts, but then the learning must continue for the rest of our lives,” he says. “Give students the skills for civil dialogue, and hopefully they’ll find that spark where they want to keep learning about history and government and how our country works and how it has worked in the past. I think the curriculum needs to be reframed as ‘citizenship.’”