In “How to Be an Antiracist,” Ibram X. Kendi argues that we should think of “racist” not as a pejorative but as a simple, widely encompassing term of description. 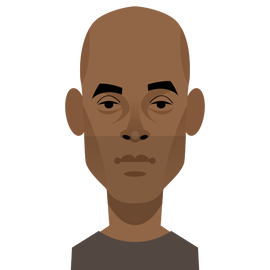 Sixteen years ago, in 2003, the student newspaper at Florida Agricultural and Mechanical University, a historically black institution in Tallahassee, published a lively column about white people. “I don’t hate whites,” the author, a senior named Ibram Rogers, wrote. “How can you hate a group of people for being who they are?” He explained that “Europeans” had been “socialized to be aggressive people,” and “raised to be racist.” His theory was that white people were fending off racial extinction, using “psychological brainwashing” and “the aids virus.” Perhaps the most incendiary line appeared at the end, after the author’s byline and e-mail address: “Ibram Rogers’ column will appear every Wednesday.”

As it turned out, that final claim, like a few of the claims that preceded it, was not quite accurate. The column caused a stir, and Rogers was summoned to see the editor of the local newspaper, the Tallahassee Democrat, where he was an intern. The editor demanded that Rogers discontinue his column, and Rogers agreed under protest, though he resolved to continue his examination of race in America, which became his life’s work. He eventually earned a Ph.D. in African-American studies from Temple, and gained a reputation in the field, along with some new names. He changed his middle name from Henry to Xolani, which is Zulu for “be peaceful,” after learning the history of Prince Henry the Navigator, a fifteenth-century Portuguese explorer who helped pioneer the African slave trade. And at his wedding, in 2013, he and his wife, Sadiqa, told their guests that they had chosen a new last name: Kendi, which means “the loved one” in the Kenyan language of Meru. In 2016, as Ibram X. Kendi, he published “Stamped from the Beginning,” a voluminous, sober-minded book that aimed to present “the definitive history of racist ideas in America.”

In the thirteen years since his abortive college-newspaper column, Kendi had become ever more convinced that racism, not race, was the central force in American history, and so he reached back to 1635 to show how malleable racism could be. The preachers who justified slavery used racist arguments, he wrote, but so did many of the abolitionists—the ubiquity of racism meant that no one was immune to its seductive power, including black people. In his view, the pioneering black sociologist W. E. B. Du Bois was propping up racist ideas in 1897, when he condemned “the immorality, crime, and laziness among the Negroes.” So, too, was Barack Obama, when, as a Presidential candidate in 2008, he decried “the erosion of black families.” Although Obama noted that this erosion was partly due to “a lack of economic opportunity,” he also made an appeal to black self-reliance, saying that members of the African-American community needed to face “our own complicity in our condition.” Kendi saw statements like these as reflections of a persistent but delusional idea that something is wrong with black people. The only thing wrong, he maintained, was racism, and the country’s failure to confront and defeat it.

“Stamped from the Beginning” was an unreservedly militant book that received a surprisingly warm reception. Amid a series of police shootings of African-Americans during President Obama’s second term, “Black lives matter” became a rallying cry and then a movement, and helped push racism to the front of the progressive conversation. By the time Obama left office, in 2017, polls showed record-high support among Democrats for “special treatment” to help African-Americans, and for the idea that “racial discrimination” is the main obstacle to racial parity. A prominent cohort of writers, led by Ta-Nehisi Coates, was calling for a serious reckoning with racism, and with the way racist policies had worked to depress black earnings and constrain black life. In this climate, Kendi’s book was celebrated as a well-timed contribution to a national conversation. It won a National Book Award and transformed Kendi into a leading public intellectual. His scholarly project has been institutionalized: Kendi is now the founding director of the Antiracist Research & Policy Center at American University, in Washington, D.C.

In modern American political discourse, racism connotes hatred, and just about everyone claims to oppose it. But many on the contemporary left have pursued a more active opposition, galvanized by the rise of Donald Trump, who has been eager to denounce black politicians but reluctant to denounce white racists. In many liberal circles, a movement has gathered force: a crusade against racism and other isms. It is a fierce movement, and sometimes a frivolous one, aiming the power of its outrage at excessive prison sentences, tasteless Halloween costumes, and many offenses in between. This movement seems to have been particularly transformative among white liberals, who are now, by some measures, more concerned about racism than African-Americans are. One survey found that white people who voted for Hillary Clinton felt warmer toward black people than toward their fellow-whites.

Most white people in America are not liberals, of course, and so the campaign against racism has often taken the form of an intra-white conflict. One of the most prominent combatants is Robin DiAngelo, a white workplace-diversity trainer, available to help organizations teach their employees to be more sensitive to race. Last year, DiAngelo published “White Fragility: Why It’s So Hard for White People to Talk About Racism,” a reflection on her career and her cause. “White identity is inherently racist,” she writes. “I strive to be ‘less white.’ ” She cites Kendi as an authority, even if she sometimes seems closer in spirit to Ibram Rogers, the undergraduate. But, then, Kendi himself is in an instructive mood: his new work presents itself as a how-to book, although, in a little more than two hundred absorbing pages, it’s also a manifesto and, from time to time, a memoir. It is titled “How to Be an Antiracist,” and in it Kendi explains how he became one, which means explaining how he used to be (as he currently sees it) a racist. Kendi is convinced that racism can be objectively identified, and therefore fought, and one day vanquished. He argues that we should stop thinking of “racist” as a pejorative, and start thinking of it as a simple description, so that we can join him in the difficult work of becoming antiracists. “One either endorses the idea of a racial hierarchy as a racist or racial equality as an antiracist,” Kendi writes, adding that it isn’t possible to be simply “not racist.” He thinks that all of us must choose a side; in fact, he thinks that we are already choosing, all the time.

The modern battle against racism, as many people have observed, is driven by a kind of sacred fervor, and in “How to Be an Antiracist” Kendi makes this link explicit. “I cannot disconnect my parents’ religious strivings to be Christian from my secular strivings to be an antiracist,” he writes. Indeed, Christianity and antiracism were intimately connected for his parents. They were inspired by Tom Skinner, a fiery black evangelist who preached the gospel of “Jesus Christ the Radical,” and by James H. Cone, one of the originators of black-liberation theology. Kendi’s parents taught him black pride, and he took these lessons seriously. As Kendi tells it, his parents’ belief in black pride led them to embrace black self-reliance, a doctrine that urged black people to overcome the legacy of racism by working hard and doing well. Kendi bitterly recalls a speech he gave at an oratory contest in high school, decrying the bad habits of black youth. “They think it’s okay not to think,” he said. “They think it’s okay to be those who are most feared in society.” Kendi won the competition, but he now regards the speech as shamefully racist, because it blamed black people for their own failures. “I was a dupe, a chump,” he writes. He argues that the idea of black underachievement lends support for anti-black policies, which in turn help perpetuate the conditions that inspire speeches like his.

Note that the ensemble is comprised of individuals