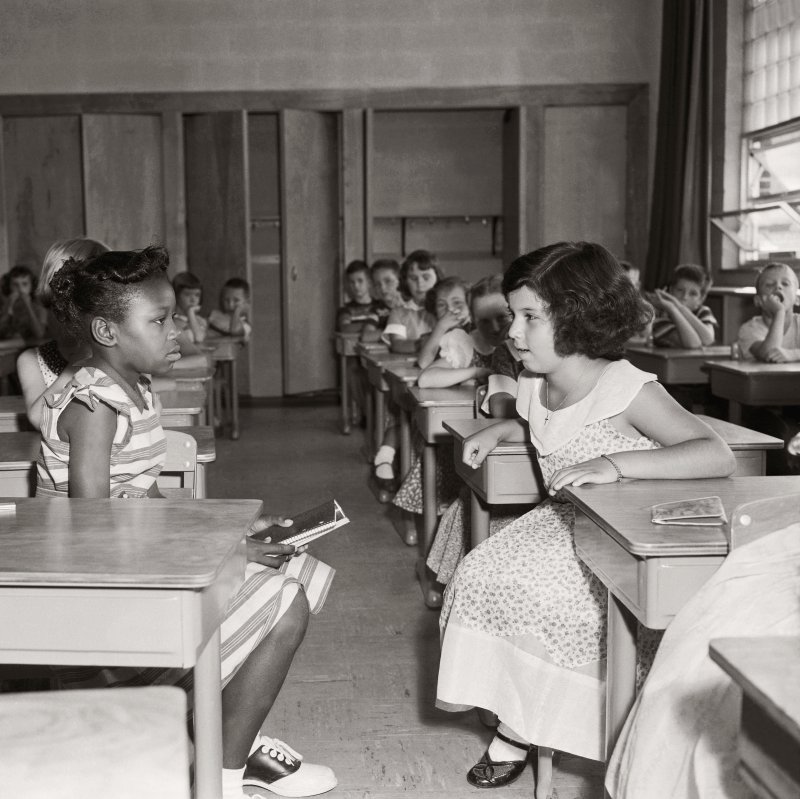 In the 1960s, African American mothers noticed something wrong in their children’s seemingly innocent class photos. Every year, youngsters tidied up in their Sunday best for their school picture, which captured a milestone of childhood. But, after the Supreme Court desegregated schools with the Brown v. Board of Education decision in 1954, these Black mothers saw something when their children brought these treasured images home: color photos of schoolmates sitting elbow-to-elbow didn’t capture Black and white children equally.

White children were rendered as they look in everyday life, while African American children lost features of their faces and turned into ink blots. The film could not simultaneously capture both dark and light skin, since an undetected bias was swirled into the film’s formulation. For decades, this flaw of the film remained out of sight, when schools were segregated and Black boys and girls and white boys and girls were photographed separately. But with the integration of schools, Black mothers witnessed that color film left their Black children in the shadows.

In 2015, two London-based photographers, Adam Broomberg and Oliver Chanarin, excavated this old color film to find out why the film could not capture the likeness of children of all races in a school photograph. When these photographers tested the film, they found that “the film wasn’t calibrated to deal with that kind of range of exposure,” said Chanarin. The film was optimized for white skin. The chemicals to dutifully pick up a range of colors had long existed, ever since the Periodic Table of Elements had become a standard item in most chemistry books. But there was a secret partiality in the combination of these elements used for the film’s chemistries, favoring one range of color over another. It was this film’s hidden history that was the reason faces in a class photo came out so differently.

Get your history fix in one place: sign up for the weekly TIME History newsletter

Kodak executives interviewed decades later reported that their company, the primary producer of color film, was made aware of its film’s flaw, but dismissed it. Addressing complaints from Black mothers in the 1950s and 1960s might have been prescient, since this was the dawn of the civil rights era. Black was beautiful, but the status quo was more. All that changed, however, when large corporations made a fuss about Kodak’s film, which they bought in bulk for advertising. A team of two unlikely businesses—furniture makers and chocolate manufacturers—protested against Kodak’s films for discriminating against dark hues.

Both industries needed not only for dark browns to come out, but for the details to be obvious and beautifully displayed. A customer needed to be tantalized by milk chocolate, or semisweet chocolate, or dark chocolate that were differentiated in a photo. Newlyweds needed to be enticed by elm or walnut or oak tables plainly shown for their dream home. Kodak employees worked hard to fix the film, making new film formulations and testing them by taking photos, sometimes gaining weight from all the chocolate they photographed. While the complaints from Black mothers could not change Kodak, those from these companies could. By the late 1970s, new—and more inclusive—formulations of color film were in the works, and the new and improved Kodak Gold film was on the market by the following decade.

To advertise this new product, Kodak did not want to bring attention to their initial film’s bias, so they announced that the new film had the ability to take a picture of a “dark horse in low light.” This poetic phrase was code to signal that darker human skin could now be registered with this new film. This time Kodak distilled the bias out of their chemical formulation, making it possible that dark woods, dark chocolates and dark skin were able to be captured.

Technologies, such as photographic film, sometimes capture the issues and beliefs and values of the times. This bias built into technology has echoes today. Today, silicon pixels in digital photography are not optimized to register dark skin well. Additionally, some web cameras, following instructions from algorithms, are unable to recognize and follow a dark face, but do so easily for a white one. Even interracial couples, who might struggle with awkward family dynamics at Thanksgiving, struggle with getting a great photo together, too. When lovebirds of light and dark complexions want to take a selfie, they will find that one will come out, but the other will be a ghost; or that one will come out and the other will be a shadow.

What the makers of film and cameras and other technologies have experienced is a tacit subscription to a belief of a standard. In other words, they have gotten on the escalator of “this is how we do things” without asking why. Scholars would describe this type of bias as one that implicitly and uncritically accepts norms and it pervades the cellphones in our pockets. But it isn’t the cameras’ fault; they are only doing what the lines of code written by humans tell them to do. These devices capture the biases that exist in our world and, in turn, speak to whom a culture values. As our technologies become more pervasive in our lives, whom they were built for and optimized for will be an important discussion. The goal is to make sure that, moving forward, technology captures what we really want captured

Excerpted from The Alchemy of Us by Ainissa Ramirez, available now from The MIT Press.